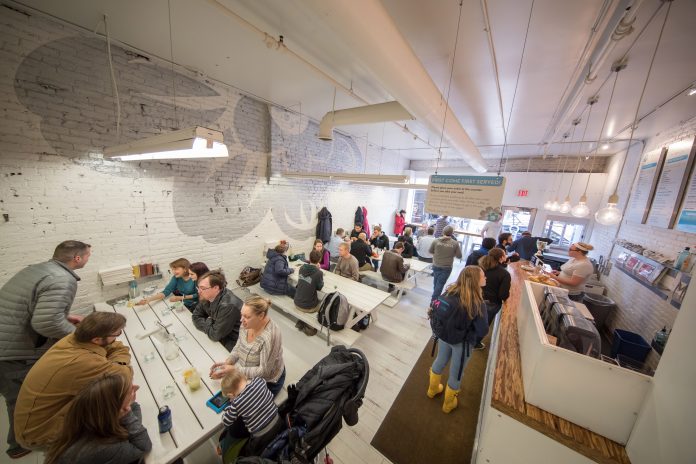 Frita Batidos, a Cuban-inspired restaurant in Ann Arbor, and Detroit’s Olympia Development of Michigan today announced the restaurant will open a Detroit location next year at the new Columbia Street shopping and dining destination between the Fox Theatre and the Little Caesars world headquarters campus expansion.

“I’ve been exploring Detroit locations for a long while, and there is no better fit than The District Detroit. It offers the opportunity for us to be in the heart of downtown with all of the vibrancy and cultural diversity that brings, as well as being in the very center of the sports and entertainment district,” says Eve Aronoff, owner and chef of Frita Batidos.

The menu will include locally-sourced items and feature an express menu for game days. It will offer salads, Cuban-inspired pressed sandwiches, churros (fried pastries), plantains, and drinks, including seasonal cocktails.

The signature Frita is a house-made chorizo burger on a brioche bun topped with shoestring fries. Other varieties offered will include beef, chicken, fish, and vegetarian black beans. Batidos, or tropical milkshakes, are made with fresh fruit, crushed ice, and sweetened milk.

The European-style Columbia Street promenade where Frita Batidos will be located is slated to bring new storefronts totaling nearly 40,000 square feet of new shops and restaurants. Planned amenities for the block-long, pedestrian-friendly strip will include cobblestone paving, festoon lights, and al fresco dining space. Additional tenants are expected to be announced soon.

“The District Detroit presents a unique opportunity for retailers to play a part in Detroit’s remarkable revitalization,” says Travis Arbogast, vice president of development at Olympia Development. “With multiple storefronts under development and a number of new announcements planned, Columbia Street and The District Detroit will offer a wide variety of shopping and dining choices.”