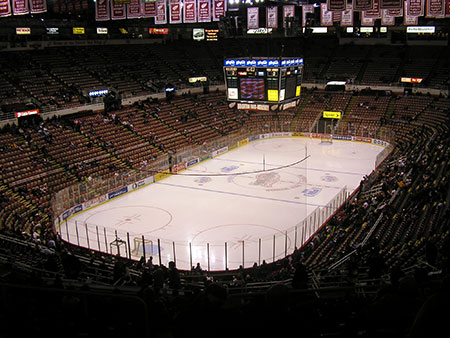 One of the final pieces of Detroit’s bankruptcy case fell into place today as the last major creditor was given the Joe Louis Arena site in a deal negotiated with the city of Detroit that will allow the city to exit bankruptcy.

Financial Guaranty Insurance Co. will develop the longtime home of the Detroit Red Wings with a hotel, condominiums, and retail shops. The development, which includes the arena’s parking garage, is prime real estate along the Detroit riverfront.

Under the deal, disclosed in court under Judge Steven Rhodes, the city will demolish the Joe Louis Arena with $6 million of financial help from the state and give the land to Financial Guaranty Insurance. The bond insurer has a $1 billion claim in the bankruptcy and was one of the last critics of the settlement. The demolition would start in 2017.

Joe Louis Arena opened in 1979 next to Cobo Center and was originally planned for the Red Wings and the Detroit Pistons, but the basketball team never consummated a lease, choosing to stay at Cobo Arena before moving to Auburn Hills. By 2000, a lack of suites close to the action, along with shared parking and concession sales, made The Joe less and less competitive with newer stadiums.

A new hockey arena for the Red Wings broke ground last month at the northwest corner of I-75 and Woodward Avenue. The 20,000-seat, $450 million venue will be part of a 45-block entertainment district that will include 2,000 residential units, shops, and pedestrian-friendly streets.