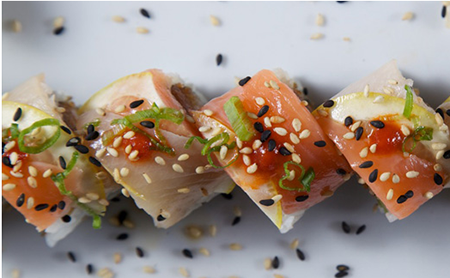 Crave — a restaurant, sushi bar, and lounge in Dearborn — is expanding its footprint by merging with John D Bistro, at 22726 Woodward Ave. in Ferndale, and is looking at Detroit for a third site.

Khalil Ramadan, owner of the Crave brand, expects Crave Ferndale to be open by Oct. 1.

“We’re a full sushi bar with a full kitchen menu,” Ramadan says. “It’s Asian food with Mediterranean infusion — lots of spices, herbs, citrus, that kind of thing. We’re going to use the same format that Crave has in Dearborn, but with this particular location, we’re going to elevate the senses a little bit. We want to give Michigan a taste of what the next notch of what future sushi is.”

Ramadan says the brand decided to move into Ferndale after developing a loyal following from the Oakland County area. “This is in such a central location. You get off the freeway and you’re right there. And I don’t have to tell you (Ferndale) turned into a little foodie town — there’s great restaurants and bars everywhere. The parking is great and there are events going on all of the time.”

The menu, which management is keeping under wraps for now, will be led by executive chef Robert O’Hara and executive sushi chef Anh Nguyen. “We could do dishes in Ferndale that Dearborn does not have, and dishes in Ferndale that Dearborn doesn’t have. We want to stay true to our roots and cater to the neighborhoods (we’re in) because at the end of the day, we don’t want to be known as a franchise restaurant. We want to be known as a neighborhood restaurant that carries a good reputation.”

The new restaurant will employ about 35 and will also offer catering services in the future. In the meantime, John D Bistro will still serve from its current menu until the changeover is complete.

Ramadan is also working on a client project called Mashawii Restaurant, a fast-casual Mediterranean eatery where fresh food is cooked on a wood-fired grill, while bread is made fresh at an on-site bakery. The Dearborn location, at 14406 W. Warren, is the first of 50 restaurants the owner has planned, Ramadan says.

After that, the brand hopes to expand outside of Michigan, starting in Chicago.

For more information about the restaurant, which opened last week and will host a grand opening on Tuesday and Wednesday, visit mashawiirestaurant.com.