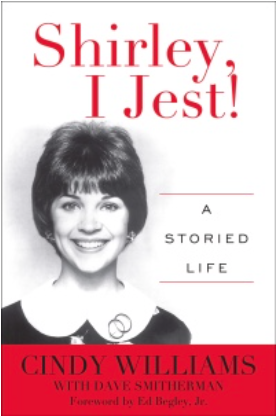 Comedic actress Cindy Williams, best known for her role on the TV-sitcom Laverne & Shirley will visit the Cranbrook campus in Bloomfield Hills to discuss her new book and her life in show business on May 12.

Williams, along with co-star Penny Marshall, appeared in the ABC sitcom from 1976 to 1983. The show, a spin-off from Happy Days, featured Williams as Shirley Feeney and Marshall as Laverne De Fazio. The pair played single roommates who worked as bottlecappers at a brewery in Milwaukee called Shotz Brewery.

California-born Williams will discuss her encounters with entertainment legends such as Gene Kelly, Lucille Ball, and Cary Grant, among others. She’ll also share stories about her personal life, as well as her relationship with Penny Marshall, her Laverne & Shirley co-star and friend.

Her book, Shirley, I Jest!: A Storied Life, (Taylor Trade Publishing) is a humorous memoir that details her television career and life in Hollywood. The book, which comes out Friday, will be available for purchase at the event.

The talk, to be held at Cranbrook’s Page Hall, includes breakfast. Tickets cost $40.