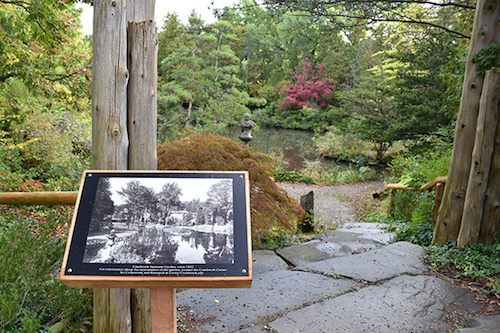 With the support from the Consulate General of Japan in Detroit, the Cranbrook Center for Collections and Research today has received a grant from the Japanese Ministry of Land, Infrastructure, Transport and Tourism to rejuvenate Cranbrook’s Japanese Garden in Bloomfield Hills.

Created in 1915 by Cranbrook founder George Booth and his father, Henry Wood Booth, Cranbrook’s Japanese Garden is among the oldest in North America. The garden remains a place of inspiration and renewal for visitors but needed an upgrade.

“There are six gardens worldwide that received one of these grants this year,” says Gregory Wittkopp, director of the Cranbrook Center for Collections and Research. “We are very fortunate to be one of these six gardens.”

The grant will provid funding to bring six gardeners to Cranbrook from the Japan Federation of Landscape Contractors. Over the course of six days, the gardeners will help to transform one corner of Cranbrook’s Japanese Garden, the Lily Pond Cascade, into what will once again be a place of beauty and contemplation.

The work on the Lily Pond Cascade is the first of a six-phase master plan for the entire Cranbrook Japanese Garden that is being designed by Sadafumi Uchiyama, garden curator of the Portland Japanese Garden in Oregon. The master plan study is being funded through a gift from Jeanne Graham, a philanthropist.

Wittkopp says Cranbrook “wants to respect the history and legacy of the garden, while also taking the opportunity to enhance it. Our goal is to make sure that this becomes a garden that is actively used for a variety of reasons, and that people find meaning here.”

Cranbrook Center for Collections and Research will celebrate the renovation of the Lily Pond Cascade and the beginning of the Japanese Garden restoration with a ribbon cutting ceremony on at 3 p.m. Tuesday at Cranbrook House.

Witkopp and Mitsuhiro Wada, Consul General of Japan in Detroit, will give opening remarks at the ribbon cutting before the water is ceremoniously turned back on in the Lily Pond Cascade.

For more information about the rejuvenation of Cranbrook’s Japanese Garden, contact the Cranbrook Center for Collections and Research at 248-645-3307 or center@cranbrook.edu.