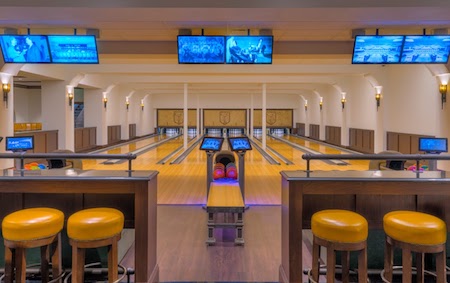 The Country Club of Detroit (CCD) has completed a renovation of its historic clubhouse, including the addition of a new fitness and bowling center as part of a long-range plan to offer current members a resort-like experience. The club was founded in 1897.

Located on 212 acres in Grosse Pointe Farms, the new fitness and recreational spaces occupy a former bowling center originally built as a natatorium wing of the Tudor-style clubhouse. To create the 13,100 square feet of new facilities, the building basement was lowered by seven feet to provide taller ceilings and larger interior spaces in the basement and on the main level.

“We used the language of the original architecture so the new spaces look like they have always been there, while updating and modernizing the interiors,” says Michael Poris, principal of McIntosh Poris Associates in Birmingham, which oversaw the renovation and interior design.

He adds that the design team drew on the Tudor Revival-style aesthetic of the clubhouse for the updated trim profiles, wall treatments, lighting fixtures, and other details. Originally designed by Albert Kahn in the early 1920s, CCD was destroyed in a fire and replaced in 1927 with a new clubhouse designed by Detroit-based Smith, Hinchman, and Grylls (known today as SmithGroup) in a Tudor style to match the original.

“McIntosh Poris Associates stood out in the interview process because they understood the Country Club of Detroit’s vision to take a big step forward while paying due respect to its storied past,” says Craig Cutler, CCD’s general manager. “The result was the transformation of an underutilized wing of the clubhouse that effortlessly combines with the existing architecture.”

Throughout the renovation, the club sought to repurpose older materials into the new design. For example, while the original metal windows were replaced on the main floor, the trim was fitted with mirrors and installed in the lower level bowling alley. In turn, wooden planks from the original bowling lanes were repurposed into tables, benches, and an antique chalkboard.

The structural changes allowed for a new six-lane bowling alley in the basement level with a bar, buffet, and casual dining facilities. Additionally, the fitness clubs were updated to include new exercise machines and programs, including stationary bikes and yoga and aerobics classes. Sound absorbent surfaces were also included to minimize noise transference.