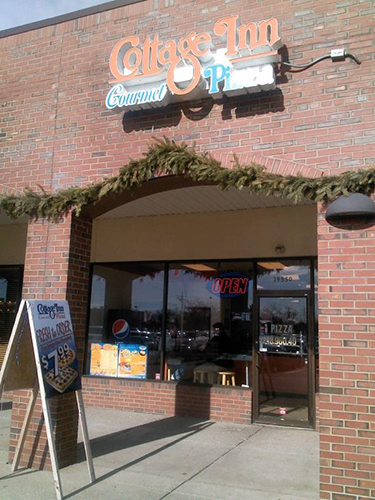 “Initially, we would like to continue to expand in Michigan with up to 100 locations before we move to gain a national presence,” says Deborah Masse, vice president of operations. She says the company will open six locations in Michigan before opening additional stores in Illinois and Florida, likely in 2016.

The franchise currently has 47 stores and has fielded 10 requests for franchising information this month alone. In comparison, about 12 people inquired about the franchise in 2013, leading to the opening on one new store, while three others changed hands to new owners.

At its peak, Cottage Inn had nearly 80 stores, but “when the economy began its downward spiral in 2003, Cottage Inn felt the crunch like every other franchise system,” says Shafyi Broumand, a spokeswoman for the company.

Masse says the past few years have been a time of transition for Cottage Inn, which was originally founded in 1948. Nick Michos, one of the original founders, is retiring, and his three sons — George, Theo, and Jimmy — have taken a more activity role in the company, Masse says. “A management team was hired in 2012 and the franchisor underwent a reorganization. Although we are still (adding) management team members, we are more ready than ever before to move to the next level,” she adds.

Recent changes include a new website, a digital marketing plan, gluten-free products, and online ordering with a built-in loyalty program.