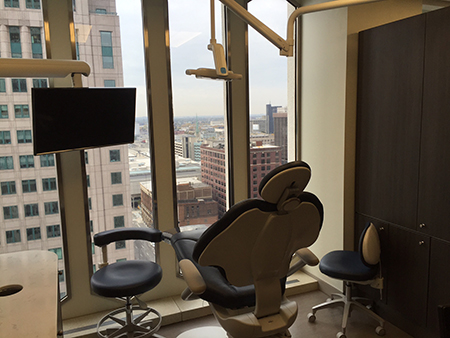 Dr. Robert DiPilla, a dentist with offices in Birmingham and New York City, will expand his practice with the opening of an office at One Woodward Avenue in downtown Detroit.

“This location will provide a (new) option for the tens of thousands of people who work downtown and sometimes find it difficult to get away from the office for routine health appointments and for those who live in the area,” Dr. DiPilla says.

Dr. DiPilla says the 2,000-square-foot facility, located on the 16th floor of the Minoru Yamasaki-designed structure will offer services including restorative and cosmetic dentistry, general cleanings, facial rejuvenation, and periodontal maintenance. The practice, open on weekdays, also offers views of the Detroit River from patient rooms.

Detroit-native Dr. DiPilla studied dentistry at the University of Detroit-Mercy. His clients include celebrities such as Kathie Lee Gifford, Wayne Gretzky, and Steve Duchesne.