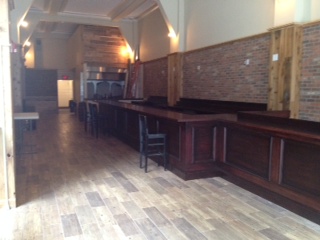 Mike Bowen, a Farmington Hills native who operated a corner bar along with a lounge in the Chicago suburbs, recently sold both enterprises and by July will open Cornerstone Barrel House at the southeast corner of Woodward and John R in downtown Detroit. Offering American comfort food, the 1,200-square-foot space was previously occupied by Oslo, a sushi restaurant.

At the same time, Bowen recently opened the Whiskey Disco in the lower level of building, which includes a full bar, a DJ booth, a band stage, and new sound system. The lower level bar is open in the evening, Thursday through Saturday (as well as for private and corporate events), while the restaurant will be open daily.

“I wanted to do a classic, old style Detroit pub given the building we’re in dates back to 1895,” Bowen says. “If there’s one theme, it’s barrel aged. We bought a number of barrels which we’ve broken down and used as decorative pieces to accent the exposed brick walls and other historical features like the 18-foot-high vaulted ceiling.”

The restaurant, at 1456 Woodward, will offer 63 seats that will have views of a small, open kitchen as well as a number of TVs, “given we’re so close to Comerica Park and Ford Field,” Bowen says. The menu will offer fresh, daily fare including salads, a house burger, sandwiches, and appetizers. “We’ll have around 20 selections on the menu, and we’ll be offering a number of different drinks, with an emphasis on bourbon,” he adds. “We’ll have around 30 full- and part-time employees.”

Cornerstone Barrel House joins a number of new and pending restaurants in downtown Detroit, including the upcoming 7 Greens Salad and Punch Bowl Social in the Z (a new parking deck along Broadway), Baker’s Keyboard Lounge, Dime Store in the Chrysler House, Freshii in 1001 Woodward, Fried Green Tomatoes on Monroe Street, La Cave and Broderick Grille in the David Broderick Tower, Top of the Pontch at the Crowne Plaza, Townhouse at One Detroit Center, and Wright & Co. in the Wright Kay Building.

IN OTHER DEVELOPMENT NEWS, Detroit’s Downtown Development Authority has approved the sale of four properties — the former Bates Garage site at Monroe and Randolph, and buildings at 1322, 1326, and 1332 Broadway — to Dan Gilbert, founder and chairman of Quicken Loans and Rock Ventures.