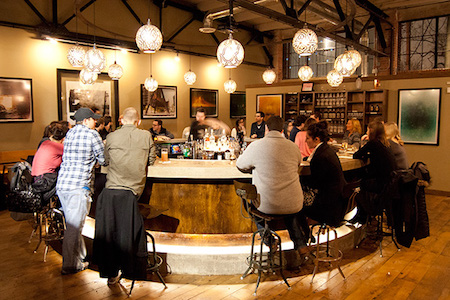 Cork and Gabel, a restaurant fusion of Irish, Italian, and German cuisine, is slated to open in Detroit’s Corktown district in April 2018. The restaurant will be owned by co-founders Matt McGrail, executive chef, and Joe Mifsud, owner of several Corktown residential buildings.

Cork and Gabel’s name is derived from a combination of gabel, the German word for fork, and cork, a nod to the restaurant’s location in Corktown. Located in the Two James Spirits Building (2445 Michigan Ave.), Cork and Gabel will have an open kitchen and floor plan, while large doors and windows will be opened seasonally. Additionally, the restaurant will offer patio seating that can accommodate 50-60 guests, and an interior dining room and bar that seats 70 guests.

Produce for the restaurant will be organic, and supplied by The Wojcik Farm in Tecumseh.

“I want to make sure everything stays fresh, as fresh as it possibly can get,” adds McGrail.

Cork and Gabel will have a full menu including a mix of Corridor Sausage Co. sausages, entrees, appetizers, desserts, and a wine, beer, whisky, and bourbon program. The restaurant’s Irish, Italian, and German fusion menu was chosen to combine McGrail’s interest in the Corktown neighborhood’s roots (named after Irish immigrants who came here starting in the early 1800s from County Cork), with Mifsud’s preference for German cuisine. Both say Cork and Gabel’s goal is to create a mixture of comfort food that everyone can enjoy, but also reaches gourmet quality.