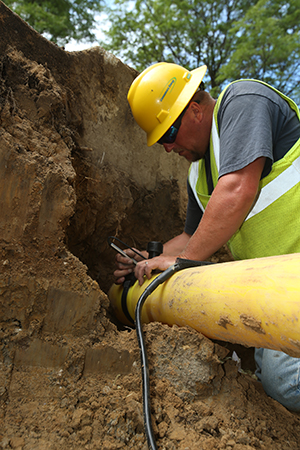 Consumers Energy announced today it is investing $225 million in essential natural gas infrastructure expansions and upgrades in the state to accommodate the growth of new businesses and residential customers.

“We are committed to an ongoing program that will strengthen our natural gas system to benefit the over 1.7 million homes and businesses we serve throughout Lower Michigan,” says Charles Crews, vice president of gas operations for Consumers Energy.

Crews says a total of $75 million will be spent to complete 60 improvement projects and replace an additional 86 miles of pipe with plastic and steel, using nearly 500 Consumers Energy employees to perform the work. Projects include:

Another major project being completed in 2016-17 is replacement of a 3.5-mile section of pipeline serving the greater Lansing area with a new steel main to improve gas deliverability and reliability.

An additional $35 million will be invested to add more than 145 miles of new gas distribution mains in areas currently without natural gas, which will support more than 2,000 new residential customers.

Crews says the Jackson-based utility company will invest $17 million to augment its pipeline system, which includes a new $9 million natural gas compressor which is being built to increase reliability to customers in Huron and Tuscola counties. Natural gas compressors pressurize gas so it can be moved through pipelines. The compressor will be operational by September.

In addition, the utility will spend $35 million in 2016 to replace gas infrastructure in conjunction with state, county, and municipal roadway and civic improvement projects, including replacement of about 1,000 gas service lines leading to homes or businesses.

To help ensure continued safe, reliable delivery of natural gas into and through Consumers Energy’s pipeline distribution system, $30 million will be invested in regulation facilities across the state, including rebuilding city gates in Laingsburg and Plymouth, as well as installing new equipment designed to enhance operations.