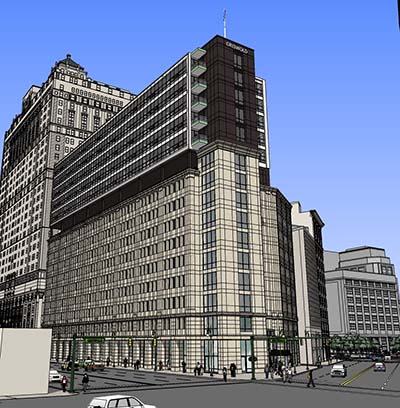 Detroit-based Roxbury Group today announced plans to begin construction next week on the Griswold, a $24 million apartment complex located in downtown Detroit’s Capitol Park neighborhood. The apartment building is scheduled to be completed by the end of 2016.

“The construction of these new high-rise apartments will help meet the growing demand for residential units downtown,” says Detroit Mayor Mike Duggan. “The fact that we are starting to see new residential construction, to complement the many residential building restorations already taking place, is a clear sign of an increasingly strong housing market in Detroit.”

The 80-unit complex, to be built atop the 10-story parking and retail structure at the corner of Griswold Street and Michigan Avenue next to the Westin Book Cadillac Hotel and Residences, will feature mostly unobstructed views of downtown Detroit. The one, two, and three-bedroom apartments range from 750 to 1,600 square feet in size, will feature nine-foot-high ceilings, floor-to-ceiling windows, and balconies on several units. Detroit-based Kraemer Design Group is the architect and Detroit-based Walbridge is the construction manager.

“It is gratifying to be able to revive the Griswold nearly a decade after our initial plans for this location were put on hold” says David Di Rita, principal of the Roxbury Group.  “We see the renewed project as a natural evolution of our original vision for the site which also builds on the current momentum in Capitol Park.”

In 2007, Roxbury Group entered into an original development agreement with the Downtown Development Authority for the Griswold, which was envisioned as 80 for-sale condominium units. The project was delayed later that year, along with several other downtown condo projects, as a result of the collapse of the national real estate market.

The Roxbury Group is also the developer of the historic David Whitney Building in downtown Detroit and the Department of Natural Resources’ Outdoor Adventure Center, among other Detroit projects.