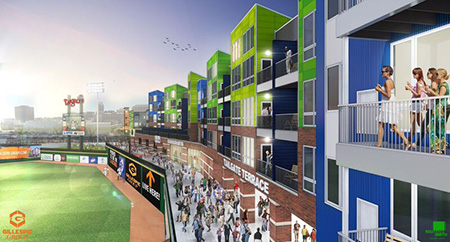 Construction has begun on an $11 million apartment complex to be built near Cooley Law School Stadium, home of Lansing Lugnuts, a professional minor league baseball team. The project represents one of the first residential units to be built at a baseball stadium.

“Residents will literally enjoy a double play with a vibrant, walkable district coupled with the thrill of baseball,” says Pat Gillespie, CEO of the Gillespie Group, the developer of the project.

The 84-unit apartment complex, called The Outfield, will sit just north of the stadium, past right center field. The development will have mostly one- and two-bedroom apartments, along with six, 380-square-foot micro units. Rents are projected to range from $775 to $1,800.

Over the winter, the city-owned stadium underwent a $13.5 million renovation to update scoreboards, seats, locker rooms, bathrooms, and concession areas.

The development is scheduled to be completed in April 2016. Construction will not interfere with this season’s games.