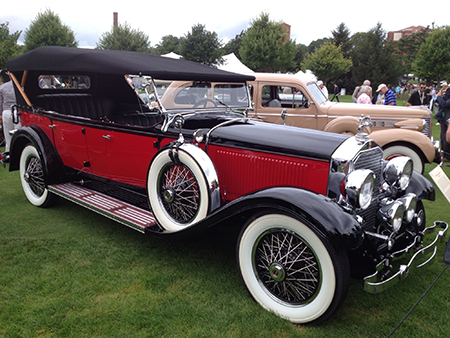 The Concours d’Elegance of America at St. John’s in Plymouth Township released details Wednesday for its 36th annual event — to be held from July 25-27. In addition to a wide collection of classic cars, the show will feature Famous Firsts, Evolution of the Sports Car from 1900 to 1975, Racing through the Ages, along with a special nod to the 50th anniversary of the Ford GT40 (Mustang) and Lamborghini.

“The highlight class depends on what’s (nominated) for each class, and we should know for sure by January,” says James McCarter, executive director of the Concours d’Elegance. “(The show) gives us the opportunity to have a wide variety of cars. We’re hoping that the racing class might have a focus on Ferrari.”

One of the featured classes this year is “High-Style Haulers: Pickups of the Jet-Age.” Event coordinators are soliciting “colorful ‘glamour’ models, with styled wide-side cargo boxes and up-level cabin trim.” In particular, officials would like to include 1957-60 era Ford Styleside pickups. Interested parties are asked to fill out a nomination form.

The display will offer passenger car-based pickups like the Ford Ranchero and the Chevrolet El Camino, as well. Other classes include Auburn Cord, Duesenberg Model J, Gas Light prior to 1914, Jazz Age 1915 to 1929, and pre-war European classics.

This is the event’s fourth year at the Inn at St. John’s, McCarter says. “We still miss Meadowbrook Hall (in Rochester Hills), but the logistics at a conference center versus a historic home offers more (room for) exhibitors. We have an onsite hotel and uninterrupted access to the whole site,” he adds.

Event planners also announced that automotive artist Charles Maher has been selected as the featured artist for the 2014 event. Based in Bloomfield Hills, Maher has presented at venues including the Automotive Hall of Fame Museum in Dearborn and the Petersen Automotive Museum in Los Angeles.

The Concours d’Elegance of America is considered one of the most prestigious classic car events in the world. In 2012, the show featured more than 300 vintage and luxury vehicles, and drew more than 10,000 visitors.