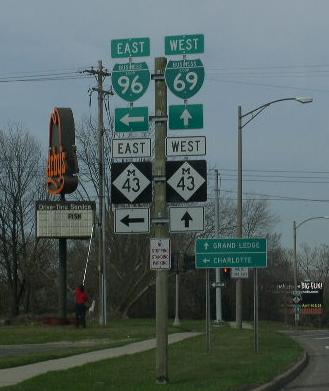 Communities along I-69, spanning from Port Huron to the Indiana border, have signed a marketing agreement branding the stretch of highway as an international trade corridor to promote the region’s transportation assets, including road, rail, air, and water, along with the area’s close proximity to Canada.

“Our region’s position enables employers to reach more than three quarters of the nation’s population by truck within two days, and is a huge attractor to businesses that need to move product quickly to their customers,” says Ron Kitchens, CEO of Southwest Michigan First, an organization of privately funded economic development advisers who signed the agreement.

The new agreement extends the branding campaign that started among Shiawassee, Genesee, Lapeer, and St. Clair counties and now extends along I-69 in the entire state encouraging municipalities and regions to cooperate — making the region especially friendly to business expansion.

East Lansing-based Prima Civitas, a nonprofit economic and community development organization, facilitated the development of the expanded trade corridor and marketing efforts. In Michigan, major cities along the I-69 corridor include Port Huron, Flint, Lansing, and Battle Creek (Marshall), and the corridor connects with I-75, I-96, and I-94.

“Michigan’s Interstate 69 is an important corridor with a variety of international trade assets and opportunities that the Lansing Economic Area Partnership is excited to highlight as part of the greater picture, especially Port Lansing’s many resources and prime industrial parks like Combs Park in Charlotte,” says Bob Trezise, president and CEO of the Lansing Economic Area Partnership.

Overall, I-69 stretches nearly 650 miles, starting at the Canadian border at Port Huron and runs through other states, down to Texas.