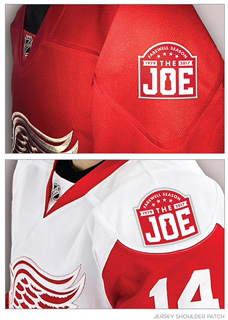 As work continues on completing the new Detroit Events Center in time for the start of the Red Wings season in fall 2017, Olympia Entertainment today announced details regarding its “Farewell Season at The Joe.” The season-long campaign will include Detroit Red Wings alumni celebrations, a commemorative patch on Red Wings jerseys, special entertainment performances, among other elements.

“The Joe will always hold a special place in our hearts,” says Tom Wilson, president and CEO of Olympia Entertainment. “Our fans will never forget the championships won on the ice and witnessing once-in-a-lifetime performances on the stage.”

The Joe Louis Arena has been the home of the Detroit Red Wings for 38 years, and has served as the hockey team’s home ice for four Stanley Cup Championships, in 1997, 1998, 2002, and 2008. Wilson says as part of the season-long celebration (2016-2017), a commemorative event logo will be used for Red Wings uniforms and merchandise, depicted by four stars placed between the “Farewell Season” phrase, one for each championship at Joe Louis.

He says other elements of the campaign include celebrations honoring the Stanley Cup championships, special entertainment performances, a special ticket design on all home Red Wings tickets, special giveaways, and private event availability for interested guests.

In addition to being the new home for the Red Wings, the Detroit Events Center will offer an array of sports and entertainment activities including concerts, family shows, and community functions. The District Detroit will include six theatres and three multi-use sport venues, along with residential, office, and retail developments that connect the venues. It will also offer an outdoor plaza with a video wall and an on-site practice ice for amateur hockey.