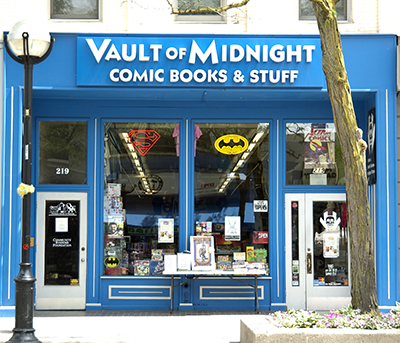 The Ann Arbor-based comic book and board game shop Vault of Midnight will expand with the opening of a storefront in downtown Detroit in Bedrock Real Estate Services’ The Z retail space this spring.

“As soon as we saw The Z and The Belt, with their bold artwork and graphics, we knew we’d found the perfect home for our Detroit location,” says Curtis Sullivan, co-owner of Vault of Midnight, along with Nick Yribar and Steve Fodale. “(The stores) exist in real, brick and mortar buildings in real, vibrant communities, and there is no place more exciting right now than downtown Detroit.”

Sullivan says the 2,000-square-foot store, to be located at 1226 Library St. between Gratiot and Grand River avenues, will offer comic books and graphic novels as well as toys, games, and action figures. He says the store will have a glass window façade and custom shelving and fixtures by Ann Arbor-based Cantelon Finishers and The River Carpentry, also in Ann Arbor.

“Comic books and the entertainment they inspire have created a billion dollar industry and the interest just keeps growing,” Fodale says. “People who visit us downtown — from aficionados to casual readers — will love our selection.”

The Z, bounded by Gratiot and Grand River Avenues and Broadway and Library Streets, features 1,300 parking spaces and 10 floors of murals. The art-filled alley called The Belt runs between the buildings of The Z.

The Vault of Michigan, founded in 1996, has storefronts in Ann Arbor and Grand Rapids.