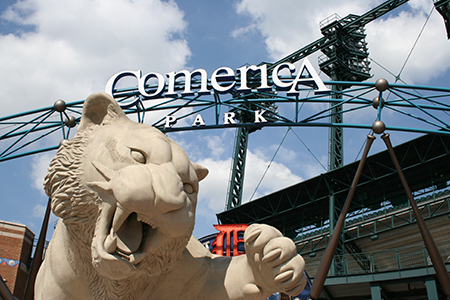 It’s been nearly 15 years since Comerica Bank began its 30-year, $66-million contract for the naming rights of the Detroit Tigers stadium and judging by the numbers provided by a Philadelphia-based sponsorship evaluation business, it may have hit a home run as a sound investment.

Since the 41,255-seat Comerica Park opened in 2000, the bank has received millions of dollars in exposure thanks to postseason home games, says Eric Smallwood, senior vice president of Front Row Analytics. During this year’s divisional series, Comerica Park garnered between $650,000 and $1.3 million in total media value per home game. Small says projected values for the AL Championship Series and World Series are even higher, clocking in at about $1.4 million and $5.1 million each, respectively.

Smallwood says the overall value since 2000 for Comerica Bank as the naming rights partner is around $181 million.

“It just really validates the value of naming rights in today’s world of sports and entertainment,” Smallwood says. “(In regards to media value), Comerica is definitely seeing a true return on their investment.”

To determine the value for each game, Smallwood and his team watch each broadcast, tracking any and all branding exposure tied to the Comerica name: a shot showing the name above the scoreboard, a text graphic that says, “Welcome to Comerica Park,” etc. The team of analysts uses special software to track the exposure (i.e., where and how long it appears on the screen).

The projected value for the 2013 games show a slight increase from the year prior, but that has more to do with price increases for 30-second commercial spots than anything else, Smallwood says.