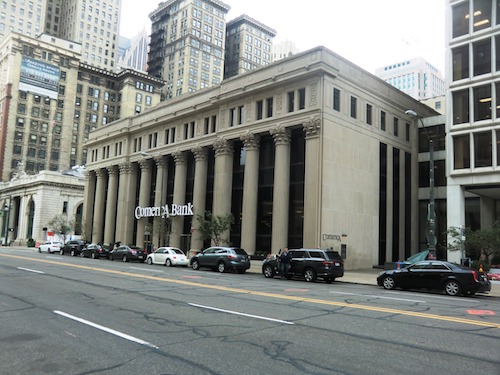 To continue to serve W. Grand-Sterling customers, a temporary drive-thru office will open in early April at 2838 West Grand Blvd. The new location will include a 24-hour ATM and two “Banker Connect” machines, where customers can talk to a virtual customer service representative while making deposits or withdrawals, cash checks, and more.

Customer accounts will be moved to Comerica’s nearby Fisher Building office, located at 3011 W. Grand Blvd., effective April 28. The bank plans to open a new office in the Third and Grand development just west of the Fisher Building that will provide its West Grand-Sterling and Fisher Building customers with enhanced services, including extended banking hours.

Other changes include the relocation of Comerica’s downtown Fort-Washington office at the 201 W. Fort St. building, which is currently for sale. The sale is contingent on the purchase or lease of a site nearby for continued service to customers in that area.

Comerica also plans to install ATMs and open a new banking center near Little Caesars Arena, which will be home to the Detroit Red Wings and the Detroit Pistons starting in September.

“We opened our first bank in downtown Detroit in 1849, and it’s an honor for us to continue to serve the city’s residents and businesses almost 170 years later,” says Mike Ritchie, Comerica’s Michigan Market president. “The developments underway will spark further growth in Detroit’s economy and we’re proud to support that growth through these changes.”

In May, the bank will sell its Fort-Military location to the Michigan Department of Transportation to make way for the new Gordie Howe International Bridge and the resulting consolidation of that office with Comerica’s Vernor-Inglis banking center.