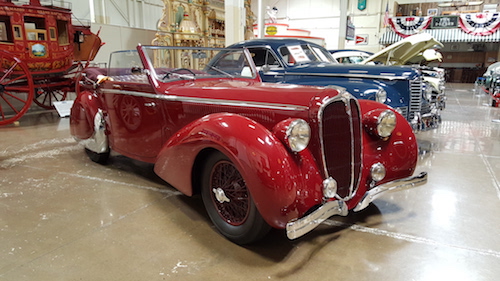 Comedian Jay Leno will perform at a charity gala in Chesterfield Township on Nov. 10 as part of a three-day fundraising campaign for Michigan Disabled American Veterans called Hat Trick for Heroes. Leno, host of Jay Leno’s Garage, will appear at Stahls Automotive Museum, which features some 80 classic and rare vehicles, music machines, and a Mighty Wurlitzer organ.

Other activities of Hat Trick for Heroes include a Veterans Day Open House at the museum on Nov. 11, and a hockey game on Nov. 12 at the 1,600-seat St. Clair Shores Civic Arena featuring Team STAHLS’ vs. the Detroit Red Wings Alumni. The event is open to the public with a $10 donation that goes to the Michigan Disabled American Veterans.

The game will include a special tribute to the late Gordie Howe, who played for the Detroit Red Wings for 25 seasons. Former Red Wings Mickey Redmond and Darren McCarty will play, along with Mark Wells, a gold medal winner from the 1980 “Miracle on Ice” U.S. Olympic hockey team.

“It is an honor to expand our Veterans Day effort this year,” says Ted Stahl, executive chairman of GroupStahl, an international association of companies in the textile and apparel sectors that’s based in Sterling Heights. The company includes STAHLS’, the world’s largest manufacturer, distributor, and direct supplier of garment decoration equipment, transfers equipment, and decorated apparel in the sports and entertainment industries.

“Both my father and brother are veterans, and we have many more family members who have served or are still serving today,” he adds. “Our way of life would not be possible without them, and I am proud to show my support.”

A collector of all things mechanical, in 2013 Stahl opened a classic car museum under the nonprofit, Stahls Automotive Foundation in Chesterfield Township (it evolved from a smaller collection in St. Clair Shores). Although the museum is home to more than 80 cars, along with a reproduction of a Big Boy drive-thru restaurant, vintage signs, jukeboxes, and other mechanical marvels, the star of the facility is the 1924 Mighty Wurlitzer and its stacked keyboards that control 23 sets of pipes (1,524 pipes in total).

Open to the public on Tuesdays and the first Saturday of each month, the museum is a popular attraction for car clubs, seniors, and schoolchildren. The 35,000-square-foot museum lacks ropes or barricades, as Stahl prefers that visitors have the opportunity to get close to the vehicles and look inside.

“We really want to encourage charity organizations to host events at the museum,” Stahl says. “When we have the organ going, people are dancing, tapping their feet, clapping, and having the time of their life. There’s nothing quite like listening to a Wurlitzer. There are a lot of nice car museums out there, but few combine the experience with music from a grand organ. Our museum really is multimedia; you can see it, feel it, and hear it.”

For tickets to the charity gala on Nov. 10, visit stahlsautogala.eventbright.com. The Nov. 11 Veterans Day Open House is free and open to the public. The alumni hockey game on Nov. 12 will feature singer Karen Newman, who will perform the National Anthem, while Second Story Interiors and Take 2 Authentics in Ferndale will feature framed sports prints and memorabilia. For more information, visit stahlsauto.com.