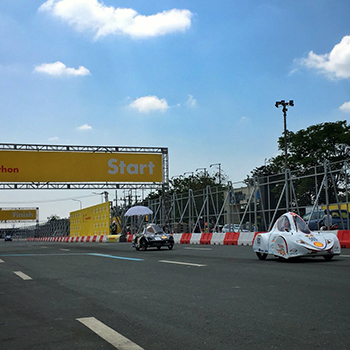 More than 1,200 college and high school students from across the Americas will visit Detroit in April with a fleet of custom-built, energy-efficient vehicles to compete in the Shell Eco-marathon Americas. The students will compete on a specially-designed track around Cobo Center.

“The Shell Eco-marathon Drivers’ World Championship highlights two key concepts in the world of motorsports: energy efficiency and driver efficiency,” says Niel Golightly, vice president of external relations for Shell. “This marks the first time that students competing in this race will need to excel at both, adding another layer of challenge to push these future engineers and scientists to the brink of their imaginations.”

Golightly says the Eco-marathon, to be held April 22-24, will challenge students to build energy-efficient cars that can travel the furthest distance on the least amount of energy. The nearly 130 teams — from countries including Brazil, Canada, Ecuador, Guatemala, Mexico, Puerto Rico, and the U.S. — will compete in all seven energy source categories: gasoline, diesel, ethanol, gas-to-liquids, CNG (compressed natural gas), battery electric, and hydrogen fuel cell.

Up to eight of the top teams from the Americas will receive a trip to London to participate non-competitively in Shell Eco-marathon Europe and later, compete in the Drivers’ World Championship, taking place July 3 in London.

To learn more about attending the free event, click here.