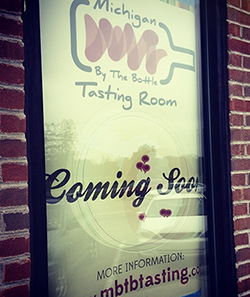 Michigan By The Bottle — a website (michiganbythebottle.com) promoting the state’s wine industry — is teaming up with eight wineries to establish a collaborative wine tasting room, expected to open in November in Royal Oak.

This will be the second tasting room for Michigan By The Bottle, which established its first store in Shelby Township in 2012.

“We had big hopes when we opened in Shelby Township that the community would come to find the tasting room as a hub in their communities for discovering local wines and getting wine information,” says Cortney Casey, who co-owns the stores with her husband, Shannon. “It’s taken off beyond our wildest beliefs — we’ve had a lot of people come in and say they drove in all the way in from Royal Oak or Berkley or Ferndale, so we started planning our (Oakland County) location pretty early on.”

“The whole idea behind (the tasting rooms) is that it gives people a place to experience Michigan wines close to home and gives them somewhere to go in between their trips to the wine trails,” Casey says. “And it also gives the wineries who we’re partners with the ability to interface with a different segment of customers than maybe who they normally see in their tasting rooms.”

Casey says she and her husband are taking their growth plans one store at a time, but notes that if the new store is as well received as the first location, its likely they will continue to open tasting rooms throughout metro Detroit.

“This tasting room has been in the works for decades,” says Ron Jeffries, Jolly Pumpkin co-founder, co-owner, and brewmaster. “We’ve always wanted to have a great place for people to enjoy the beers that we brew on-site and we’re excited to unveil this new space which will allow us to do just that.”