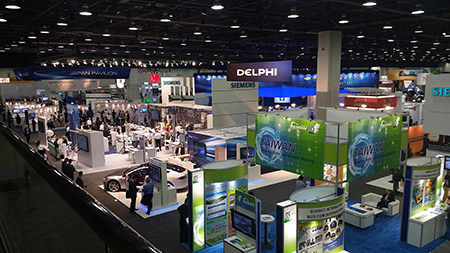 Officials from Cobo Center announced today that several new multi-year event contracts have contributed to making 2014 the center’s most successful year in recent history — with an overall total revenue increase of 34 percent when compared to fiscal year 2013.

“The transformation of Cobo Center is palpable, and the new high tech event spaces are bringing excitement to the shows,” says Thom Connors, the facility’s general manager. “Add to that the fact that Detroit has once again become a strong destination due to regional member populations for engineering, manufacturing, automotive, and medical shows, and you create an environment for shows in these sectors to flourish.”

Events are doing so well at the recently renovated center that many have agreed to sign multi-year contracts: The Society of Automotive Engineers just signed a new five-year agreement for their World Congress, and starting in 2015, the Shell-Eco Marathon energy efficient vehicle competition will locate at Cobo Center for three consecutive years.

NACE/CARS and SME’s Big M will also return next year, as will the North American International Auto Show, which has a contract with the facility through 2016.

“Each new season at Cobo Center has realized a significant rise in bookings,” says Larry Alexander, chairman of the Detroit Regional Convention Facility Authority, governing body of Cobo. “Couple that with sound fiscal management and strict energy conservation measures, and you have the formula for our current success.”

Alexander says the new event revenue means Cobo will finish the fiscal year significantly ahead of budget and ahead of schedule for deficit reduction targets through 2015.