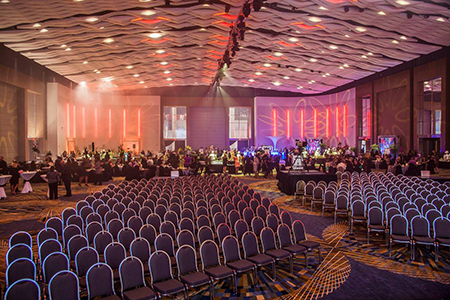 A five-year, nearly $280 million renovation of Cobo Center is roughly 70 percent finished, with construction on track for completion by the end of 2014, the Detroit Regional Convention Facility Authority announced Thursday.

“At this time, we have approximately $70 million left in the project,” says Patrick Bero, CEO and CFO of the Cobo Authority. Items remaining on the to-do lists include the main concourse, which faces Washington Boulevard; the addition of two video boards, one facing East Jefferson and one at the corner of Congress and Washington; and completing renovations on the second floor of the building’s south side meeting rooms.

With the impending opening of the 2014 North American International Auto Show fast approaching (Jan.18-26), the facility will be able to offer more to visitors than it did last year, Bero says. Two of the four levels on the south side will be complete by the time of the show.

“There’s still quite a bit going on between this show (2014) and the end of next year, but I think (visitors) will be very excited about everything we’ve delivered so far,” says Bero, noting that the atrium, ballroom, and food court will be available. “We opened the atrium last year on a partially completed basis for the auto show, and when we officially opened (the site) on Sept. 7, we had several media members who said they thought the atrium had been done back in January.

“They really got to see the full scope of everything that we were doing.”

The center finished its 2013 fiscal year with a profit instead of a $1.5 million loss, which was originally anticipated. The increase was related to operating expenses that were more than $1 million below budget as well as parking revenue that was much higher than expected, the authority reported.

The authority adopted a $15.8 million operating expense budget for its 2013-14 fiscal year, and $16.1 million for 2014-15. The center is expected to generate nearly 20 percent more operating cash over the next two years while absorbing another $2 million reduction in the subsidy it receives from state taxpayers, according to budgets approved by the authority in September.

“This is really a continuation of a story that started back in September 2009,” Bero says. “The success we have had to date is directly related to the leadership of our board. They’ve gave us the mandate and the direction to take the path that we’re currently on.”