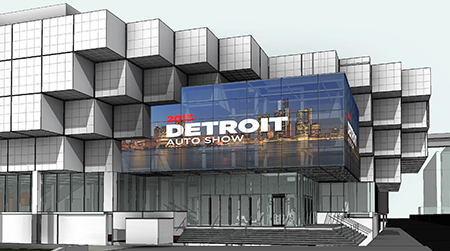 Construction has begun on Cobo Center’s main entrance glass canopy, which will support the facility’s 6,253-square-foot video marquee. The project is expected to be completed by next summer.

While the main video wall, facing Washington Boulevard, won’t be ready in time for the North American International Auto Show in January, the two video screens at the corner of Congress and Washington will be, says Patrick Bero, CEO and CFO of the Cobo Center Detroit Regional Convention Facility Authority.

“We’re also working tirelessly on getting the new turnaround in front of the east entrance done in time for the auto show,” Bero says. “And we’re developing our new plaza out front which we think is going to be a real game changer for us.”

The renovations and additions are all part of the center’s $279-million capital improvement program, which launched in 2010 and was expected to wrap up by the end of the year. And while contractors have made their way through more than 90 percent of the upgrades, officials ultimately decided to extend the deadline to June 30 2015.

Renovations to the south side of the building, or the original structure, will be complete by October, thereby allowing the process to speed up a bit, Bero says.

“Because the facility is open and in operation, we’ve had to (renovate the meeting rooms) piecemeal as they become available,” Bero says. “But with the opening of the 200-level southside meeting rooms, this will enable us to start working on all of the meeting rooms at the 300- and 400-levels as well as the main concourse itself with new carpeting and the like.”

While not yet completed, the impact of the improvement program has already been felt by the facility, which recently experienced its busiest summer in terms of bookings and events in more than 20 years.

“Last year, without the operating subsidy, our deficit was $5.5 million,” Bero says. “This year, it will be less than $4 million. We have to get the facility to break even by 2023, and we’re on a very good path toward making that happen.”