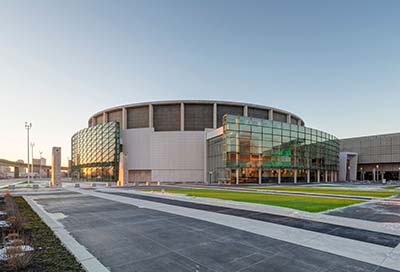 Cobo Center in downtown Detroit today announced its $279 million renovation will be completed in the spring with the addition of Cobo Square, an outdoor flex space which includes a large terrace overlooking the Detroit River.

“I think the most important part of the reinvention of Cobo Center was the adaptive reuse of the old arena (by incorporating outdoor space),” says Thom Connors, general manager of Cobo Center. “By cutting part of it away and creating a new atrium, it really tied the whole renovation together and gave the view from the main concourse out to the river and across to Canada. It brings people down to the newer, improved south side of the building and the majesty of the river.”

Connors says Cobo Square will be used for programming including art exhibits, exercise and yoga, and biergartens, among other elements. He says the 45,000-square-foot terrace is designed to connect Cobo Center to the downtown Detroit culture.

Connors says the renovations, which began five years ago, included the addition of a broadcast studio and a digital sign on the exterior of Cobo Center overlooking Washington Boulevard and Jefferson Avenue.

“There are very few second acts for arenas in America,” Connors says. “In the automotive engineering and manufacturing areas, we’re now back on the map as the place to hold a meeting or come and host a trade show. Some of them are now permanently reestablished at Cobo Center as a result of this successful reinvention and renovation of the facility.”