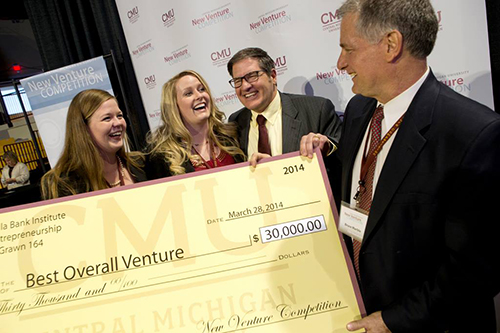 Called Un-corked, the business lends itself to a lower cost structure and a less expensive product for consumers, says Emily Miller, one of the winners. Considering the different types of individual corks — plastics run 30-35 cents, synthetics usually cost 70 cents, and regular corks that average a dollar — the CMU duo decided to create a synthetic-regular hybrid.

While most manufacturers tend to use only 30 percent of bark from cork oak trees, Un-corked aims to utilize the 70 percent that has been discarded.

“We are trying to prolong the life of the endangered tree,” says Miller, a senior entrepreneurship major with a minor in legal studies.

Miller of Highland Township and Courtney Lorenz of Traverse City were one of 23 different teams to propose a business plan during the CMU New Venture Competition. The eight-month-long program, which included workshops, coaching, and networking, culminated with the competition day on March 28, when Un-corked won the title of best overall venture.

Deb Zellner, executive director of the Isabella Bank Institute of Entrepreneurship in the college of business, says Un-corked worked with Anil Kumar, a professor in business technology at CMU, and Loren Lower, a former scientist with Delphi and Dow Chemical.

Now, with a provisional patent in hand, the startup is prepared to enter the testing phase, Miller says. “We are using (the $30,000 prize) to propel us forward into gaining a full patent.”

While Un-corked hopes to expand overseas into Europe, the duo has already secured contacts in Napa Valley, Boston, the European Union, Indiana, and northern Michigan.