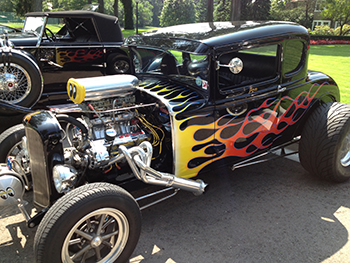 The Woodward Dream Cruise may not be until next weekend, but Detroiters and car lovers can get in on the festivities early thanks to the inaugural Classic Cruise Extravaganza.

The event, taking place Aug. 14-15 at the Detroit Golf Club, located at 17911 Hamilton Road, aims to bring some Dream Cruise excitement to the city of Detroit by showcasing dozens of cars along with vintage and custom motorcycles.

The event comes in the days immediately preceding the 20th annual Woodward Dream Cruise on Aug. 16. The cruise travels along a 16-mile stretch on Woodward Avenue that extends from Ferndale through Pontiac. Notably absent on the path is Detroit itself.

“Detroit and cars are synonymous,” says event organizer Marvin Towns. “Detroit has to get involved in the Dream Cruise, and we saw this as a wonderful way to show the hidden jewels within the city of Detroit.”

Some of the vehicles set to be on display include a 1930 Model A Ford, an original 1970 Trans Am, a 1988 Ferrari Testarossa, and a 1970 Buick GSX. The owners of the vehicles are longtime attendees of the Dream Cruise, who echo Towns’ desire to highlight classic cars in the Motor City.

We can show off the city,” Towns says. “A lot of people in Detroit would never be able to see these cars up close and personal.”

Proceeds from the event will benefit the Black United Fund of Michigan, which supports nonprofits addressing the needs of the state’s African American community, and a new emergency center at McLaren Oakland.

On Aug. 14, the Young Professionals Cruisin’ Business and Networking party will feature music by DJ Bruce Bailey and DJ Kutz, food, and networking. Tickets are $40.

The Classic Cruise Extravaganza Gala and Auction will take place the following day, offering a more formal environment with dinner and drinks, speeches from charity representatives, a charity auction, a cocktail party, dancing, and music from Larry Lee and the Back in the Day Band. Tickets are $300.

Reservations are not required but advance ticket purchase is recommended.