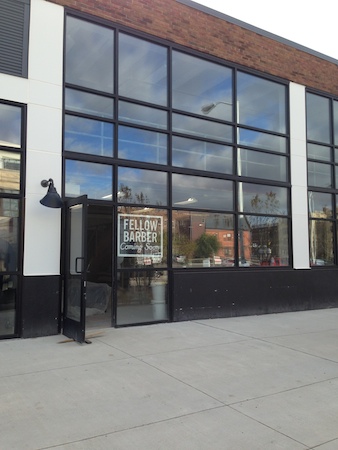 Brooklyn-based Fellow Barber is breaking from the East and West coasts to open its first Midwest location in Detroit’s Midtown District on Monday. Plans include a bar on the second floor, which will open in the spring.

“I’m excited to be coming back and opening a business in Michigan,” says William Tigertt, who grew up in Pleasant Ridge and later lived in Detroit until leaving the state in 2001. “Hopefully, this will be the first of a few stores (here).”

The 1,800-square-foot space, at 441 W. Canfield St., which is near Shinola’s flagship store and the Traffic Jam and Snug, will specialize in the classics — straight-razor shaves and haircuts — provided on a walk-in basis. Prices range from $18 for a beard trim to $85 for a shave-and-haircut combination, which includes hot and cold towel service. Women with short, men’s-style cuts are also welcome, Tigertt says.

Plans are to open the bar overlooking the street, Tigertt says. “It will be a nice amenity for folks who are waiting, if they want to have a beer or come in and have a cocktail afterwards,” he says. That portion of the project is still in the design phase, so details including the venue’s name and seating count have not yet been solidified.”

The new location will also include name-brand men’s grooming products, which haven’t been available for retail in the Midwest until now. Prices range from $20 for shaving cream to $150 for a classic shave gift set.

With stores in Manhattan, Brooklyn, and San Francisco, Fellow Barber aims to reimagine the traditional men’s barbershop, says Tigertt, who co-owns the business with Sam Buffa. “Our stores tend to be little community centers, where people come in and hang out, commiserate, and kind of get away from their girlfriends or wives.”

Tigertt says the Detroit location will employ about 12 barbers when it opens, with plans to bring on additional stylists in the near future.