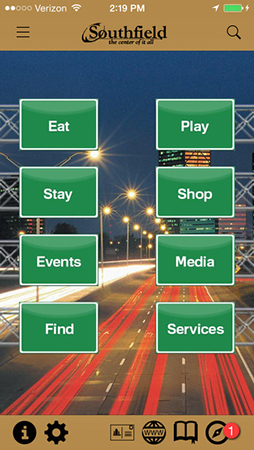 The city of Southfield has launched a new app for residents and visitors that highlights the city’s amenities and services when traveling to or throughout the city.

“This new app (provides) a wealth of information to users about the city and all its attractions, restaurants, shopping and more,” says Fred Zorn, the city’s administrator.

Spot Southfield, which has been in development for the past several months by Bar-Z in Austin, Texas, provides users with detailed information about the city’s dining options, entertainment and recreation activities, hotels and accommodations, various retailers, and upcoming events.

Using static videos and a live feed of the municipal government channel Cable 15, the app also allows users to create special Southfield-themed postcards for family and friends. It also includes features such as turn-by-turn directions and direct dialing.

Future plans for the app include the ability for users to report issues in the city (i.e., potholes, etc.) to the appropriate department as well as the option to book tee times for city golf courses.

To download the free app, visit the Apple App Store or Google Play.