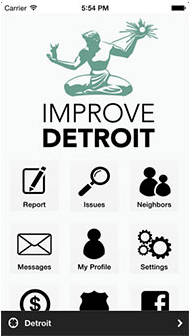 Detroit Mayor Mike Duggan today announced the launch of Improve Detroit, a new mobile app that will allows residents to report issues such as potholes, broken traffic signals, and abandoned vehicles via a smartphone.

“The new Improve Detroit app is like having City Hall on your phone,” Duggan says. “From wherever they are, this simple tool will allow residents to report an urgent problem we may not know about. They will be able to report the type of problem, the exact location, and even submit a photo.”

Once the report is submitted, Improve Detroit will route the issue to the appropriate department and generate a work order.

Other cities across the country have apps similar to the one Detroit has launched.

The Detroit app is available for download on Google Play and the Apple Store. All issues reported through Improve Detroit are available for the public to view on the app or on the city’s website at DetroitMi.gov/How-Do-I/Mobile-Apps/DetroitDelivers.