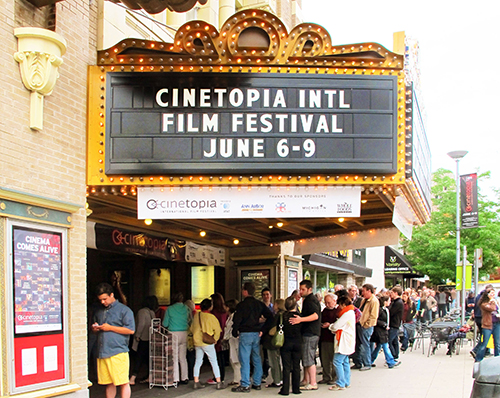 The inaugural Cinetopia Cinema Circus — which brings free movie screenings to neighborhoods in Detroit as a harbinger to the third annual Cinetopia International Film Festival — kicks off today with acrobatics and Pixar’s Ratatouille at Shed 2 in Eastern Market.

“These neighborhood outdoor screenings are a way to help celebrate the upcoming film festival,” says Russ Collins, founder of the Cinetopia festival. “It just sets things off in the right tone.”

The festival, held originally only in Ann Arbor, will bring 110 screenings of 50 films to 10 venues in southeast Michigan, including the Detroit Film Theatre at the Detroit Institute of Arts, College for Creative Studies, Charles H. Wright Museum of African American History, Cinema Detroit, Michigan Science Center, and the Arab American National Museum in Detroit.

The expansion is a natural move when you consider Detroit’s cultural history, Collins says. “Through the ’40s, ’50s, and into the ’60s, Detroit was second to Hollywood in the amount of film that was shot and processed here. Most of the films were documentaries, training films and advertising work, and it went on for many years. So there’s this character of Detroit as a film center that has been forgotten in the last few decades,” he says.

Collins says the festival — which brings together feature-length dramas, comedies, and documentaries from festivals including Sundance, Cannes, Venice, SXSW, and Tribeca — will be a different experience from going to a local movie theater.

“With a film festival, the best way to go is to set aside a day or two or three and just check out every film you can,” Collins says. “For instance, we’ve got this really fun documentary called Jingle Bell Roc and it’s about these people who collect mostly bad Christmas music. It’s great. (The festival) is all about discovering a director or genre or subject matter that you wouldn’t have thought you’d have any interest in.”