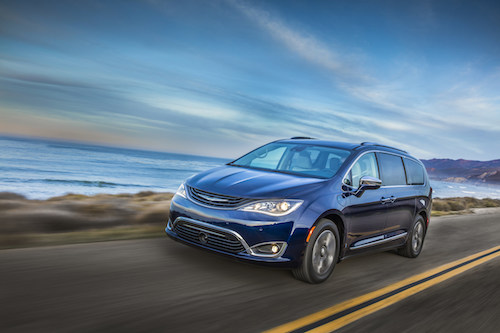 Officials with the company, which estimated that the vehicle would achieve 80 MPGe, say that that no other minivan has come close to this rating.

“At 84 MPGe, the all-new 2017 Chrysler Pacifica Hybrid surpasses our initially stated performance,” says Tim Kuniskis, head of passenger car brands for Dodge, SRT, Chrysler, and Fiat at FCA US. “These EPA test results paint a clear picture of the benefits our customers can expect from driving the most fuel-efficient minivan ever.”

EPA testing also established a total driving range rating of 566 miles for the minivan, up from 530, and set the electric-only range rating at 33 miles, up from 30.

The Pacifica Hybrid Minivan features a 16-kWh lithium-ion battery pack, which can be fully recharged in 14 hours.

When the battery’s energy is depleted, the Pacifica Hybrid Minivan becomes a part-time electric vehicle to maximize energy and efficiency.

Power to the wheels is supplied by the electric drive system or supplemented by a specially adapted new version of the gasoline-powered Pentastar 3.6-liter V-6.