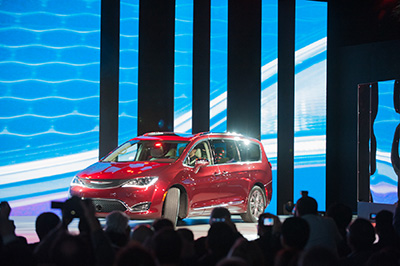 The Chrysler brand today revealed its all-new 2017 Pacifica at the 2016 North American International Auto Show, featuring a lighter body structure and added storage space. The vehicle will be available in dealer showrooms in the spring.

“(Chrysler has sold) 14.3 million minivans … since (1984), and we continue to evolve and lead the market,” said Timothy Kuniskis, head of passenger car brands for FCA-North America. “Chrysler has launched 78 new innovations since 1984, and now we’re adding 37 innovations. Forget everything you know about minivans, (the 2017 Chrysler Pacifica is) maybe the first minivan where the kids will let you pick them up in front of the movie theater.”

Kuniskis said the 2017 Pacifica has a “vault-like” interior environment, with low levels of wind and road noise. He said the vehicle’s body structure is one of the lightest and stiffest in its class.

Kuniskis said the Pacifica has eight-passenger seating and the ability to fit an eight by 4-foot sheet of plywood.

The Pacifica Hybrid, the industry’s first electric minivan, gets an estimated range of 30 miles on electric power from a lithium-ion battery. The Hybrid will be available in the second half of 2016. On the vehicle’s gasoline models, the V6 engine produces nearly 290 horsepower and more than 260 pounds per feet of torque. Engine stop-start technology is a standard feature of the 2017 Pacifica.

Kuniskis said the Chrysler Pacifica and the Pacifica Hybrid come in 10 exterior paint colors. He said the minivan has a long wheelbase, wide track, and low ground clearance, giving the vehicle a planted, capable stance.

The 2017 Pacifica comes with a 7-inch full-color driver information display, an 8.4-inch touchscreen, and Uconnect features. Rear passengers can watch movies or connect to personal devices through two 10-inch touchscreens. The vehicle also has six speakers, remote start, and heated and ventilated seats.