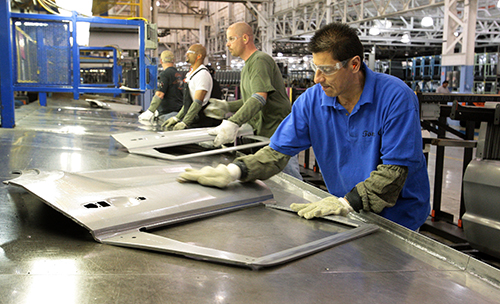 “As production at our Chrysler Group assembly plants has nearly tripled in the past five years, we have been pushing our stamping facilities to keep up,” said Mauro Pino, vice president and head of manufacturing at Chrysler Group. “This much-needed investment for a new press line will help us continue to meet demand and maintain the quality that our stamping plants have worked so hard to achieve.”

The investment will be used to purchase and install a new 180-inch press line, which will increase capacity by approximately 3.6 million parts per year.  In addition, the new press line will also reduce complexity and energy usage, while improving reliability and maintainability, Pino says.

The Warren plant on Mound Road currently produces 80 million parts stamped from sheet metal each year. These parts — including hoods, roofs, and fenders — are used for a variety of vehicles, including the Dodge Durango and Jeep Grand Cherokee at the Jefferson North Assembly Plant in Detroit, and Ram trucks at the Warren Truck Assembly Plant.

Construction for the new press line has already begun, with production anticipated to begin in December 2015.