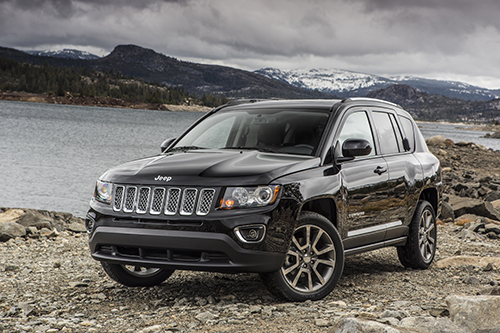 While Dodge, Ram Truck, and Fiat each saw year-over-year sales gains in April, Jeep led the way with a 52 percent increase. “Both of our minivans (Dodge Grand Caravan and Chrysler Town & Country) had a strong April, and the Ram pickup truck had its best April sales ever,” says Reid Bigland, head of Chrysler’s U.S. sales.

Chrysler brand sales, however, dipped to 21 percent in April, reflecting the end of production of the 2014 Chrysler 200 mid-size sedan and convertible, Bigland says. The redesigned 2015 Chrysler 200 will start hitting showrooms this month.

At General Motors, dealers delivered 254,076 vehicles in the U.S. last month, with total sales up 7 percent when compared to April 2013. “Truck sales and transaction prices were especially strong,” says Kurt McNeil, the automaker’s U.S. vice president of sales operations. “As we expected, the economy continues to strengthen.”

Some of GM’s newest products include the 2015 Cadillac Escalade and Escalade ESV, which began arriving in showrooms last month; the Cadillac ATS coupe, which arrives this summer; and the Chevrolet Colorado and GMC Canyon mid-size pickups, which arrive in the fall.

In Dearborn, Ford Motor Co. reported total U.S. sales of 211,126 vehicles, down 1 percent from a year ago. Top sellers included the F-Series, which sold 63,387 vehicles last month, and the Explorer, which sold 16,629 units, up 17 percent from the year before.

F-Series and Explorer posted their best results in almost a decade, says John Felice, Ford vice president, U.S. marketing, sales and service. “We also saw another breakout month for Fusion, with continued strength in the Western region. Overall, industry sales continued the rebound from January and February and are on a path of steady growth.”

While Lincoln sales dropped 11 percent to 6,803 vehicles last month, the brand’s overall sales are up 21 percent for the year so far, Felice says.

IN OTHER FORD NEWS, the company annouced today that Mark Fields, currently Ford’s COO, will replace Alan Mulally as its president and CEO, effective July 1.

“From the first day we discussed Ford’s transformation eight years ago, Alan and I agreed that developing the next generation of leaders and ensuring an orderly CEO succession were among our highest priorities,” says Executive Chairman Bill Ford. “Mark has transformed several of our operations around the world into much stronger businesses during his 25 years at Ford. Now, Mark is ready to lead our company into the future as CEO.”