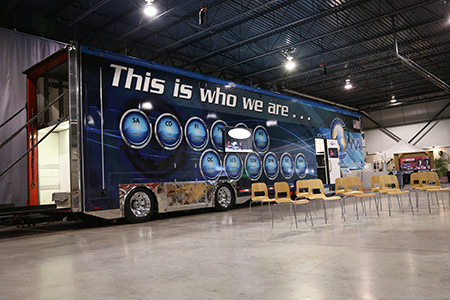 Expanding its target audience beyond middle managers and team leaders, Chrysler Group’s World Class Manufacturing Academy in Warren — which focuses on reducing waste, increasing productivity, and improving quality and safety — is bringing training to the factory floor level via a mobile unit crafted from a former NASCAR motorsports trailer.

“Chrysler’s team members have not had a chance to come to our programs here in Warren because the sessions are two to four days long,” says Scott Tolmie, who directs the academy. “To relieve them from the (assembly) line to do a deep-dive training on problem solving is very difficult to do while running the plant at the same time.”

Chrysler’s four Kokomo, Ind. facilities were the first stop last week to fully utilize the mobile unit with a full series of classes. Workers participated in three, 30-minute classes that focus on first-hand problem solving as well as kaizen — a suggestion to improve a process or procedure on their own job or the company in general. 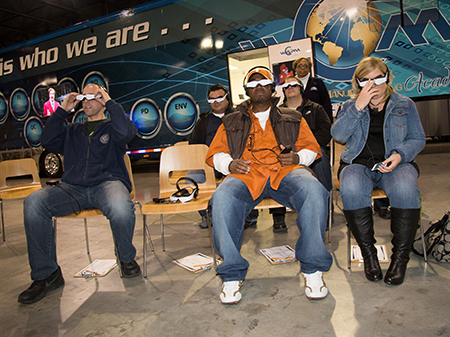 Greg Marquardt, a UAW trainer at the academy, says he recognizes first hand how sharing the company’s philosophy will have a positive impact on the automaker’s front line employees. “I started off as a team member, and then went to a team leader, then a team leader trainer, and am now a trainer at the academy. I’ve been through the same stuff they’ve gone through. I understand their frustrations,” he says.

Since opening last year, the Warren academy has trained more than 7,300 workers from across the nation. And, with the introduction of the new mobile unit, Chrysler officials say those numbers should only increase. In Kokomo, the trainers met with more than 250 participants over a period of three days. The academy plans to visit 20 plants in 2014.

In addition to the standard academy courses, future plans for the mobile unit include training in specialized topics and hosting validation events, the final step of verifying that lessons learned at the academy have been applied properly to a plant project.

Pictured at right: Warren Truck Assembly Plant employees on 3-D goggles to learn how to create an effective kaizen in one of three classes through the World Class Manufacturing Academy’s new mobile unit.