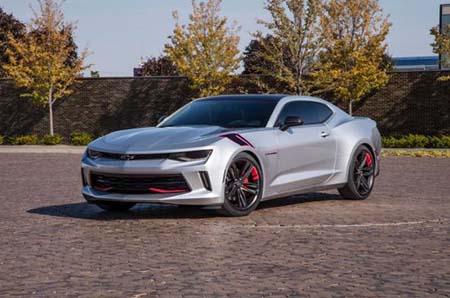 The Chevy Trax concept, a compact SUV, has graphite accents on the mirror caps, grille, and window moldings. The vehicle has 18-inch wheels with red accents and tinted tail lamp lenses and windows.

He says the Silverado concept has red tow hooks, 22-inch wheels, and a black-chrome exhaust tip.

Chevy designers also created a concept of the all-new, 2016 Chevrolet Spark, with 17-inch wheels and a lowered suspension gives the car an aggressive stance. Todd Parker, director of design at Chevrolet says the concept has similar sporty treatments to the Camaro, Sonic, and Cruze production models.

“Every Chevrolet has the DNA of the Corvette and the Spark RS concept shows how the brand’s smallest car can deliver big on personalization,” Parker says. “It advances the RS heritage and interprets it in an entirely new way.”

The vehicles will make their public debut at the SEMA Show in Las Vegas next month.