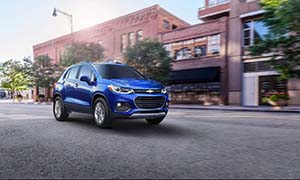 Chevrolet today introduced the 2017 Trax, a small SUV with an all-new front-end appearance and a redesigned instrument panel, at the Chicago Auto Show, along with a Chevy Camaro 1LE performance package and Midnight special editions of the 2016 Silverado 1500 Z71 and 2016 Colorado Z71.

“In the fastest-growing segment, Chevrolet Trax’s momentum is sure to continue with great design enhancements, premium details, and the latest technologies,” says Steve Majoros, director of marketing for Chevrolet cars and crossovers. “Features such as Apple CarPlay and Android Auto compatibility and four new active safety features offer customers more than most competitors — and at an entry-level price.”

Majoros says the 2017 Trax, which goes on sale in the fall, has a new grille and headlamps that are similar to the styling of the new Malibu, Cruze, and Volt. He says the front fascia is new and incorporates Chevy’s new proportioned dual port grille. The headlamps flow around the corners and into the front fenders.

“It’s a more sculptural, sophisticated design,” says Steve Kim, designer of the Trax. “There’s also a sporty streak in the new styling that speaks to the Trax’s agile, fun-to-drive personality.”

The 2017 Trax has a modified instrument panel with an upper dashboard hood that flows interrupted across the panel. The redesigned center instrument panel features greater visibility of the seven-inch MyLink color touch screen. The infotainment system supports connectivity technologies including Apple CarPlay, Android Auto, and available 4G LTE with a Wi-Fi hotspot.

The vehicle has a 1.4-liter four-cylinder engine that gets 138 horsepower and nearly 150 pounds per feet of torque.

Chevy also introduced the 1LE performance package for both V6 and V8 models, offering increased handling and track performance. For the first time, the 1LE package will be available on the Camaro 1LT and 2LT coupes.

The Camaro LT 1LE has a 3.6-liter V6 engine with lightweight 20-inch aluminum wheels, a cooling package, a dual mode exhaust system, and a suede steering wheel. The 2017 Camaro SS 1LE offers a performance-oriented chassis system with specific tuning for the dampers, springs, and stabilizer bars. The vehicle also has a 6.2-liter V8 engine that gets 455 horsepower.

Chevy also announced it is expanding its Midnight Special Edition with new models available on the 2016 Silverado 1500 Z71 and 2016 Colorado Z71.