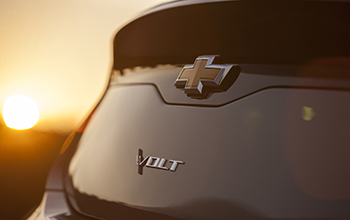 The next-generation Chevrolet Volt will make its debut at the 2015 North American International Auto Show, to be held Jan. 17-25 at Cobo Center in Detroit, the automaker announced today.

The new model — which will continue to be manufactured at General Motors’ Detroit-Hamtramck assembly plant — builds upon its predecessors’ use of innovative technology, says Tim Mahoney, a spokesman for Chevrolet.

“Volt is the perfect example of the ingenuity that drives everything we do at Chevrolet,” Mahoney said at the Center for Automotive Research Management Briefing, held today in Traverse City. “Volt fully delivers on the promises of Find New Roads (the brand’s tagline) and will continue to provide consumers with the transportation solutions they need and deserve in the future.”

Mahoney says Volt owners are driving more than 63 percent of their overall miles in electric vehicle mode, collectively logging more than 500 million gas-free miles since the Volt’s retail debut. Volt owners who charge regularly typically drive more than 970 miles between fill-ups, and visit a gas station less than once a month.

More than 65,000 Volts have been sold since being introduced in 2010, making it the best-selling plug-in passenger car in the U.S. market.