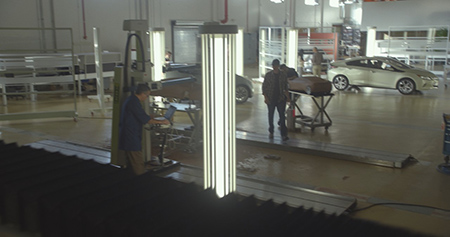 The 2016 Chevrolet Volt and EN-V will appear in the new Disney film Tomorrowland, an adventure and science fiction film starring George Clooney and Britt Robertson that debuts on May 22.

The Volt is a plug-in hybrid car, and can travel more than 1,000 miles between gas fill-ups with regular charging. Chevrolet launched the Volt four years ago, and the car has outsold all other hybrids that can be recharged from a wall socket. The car features leather upholstery, heated rear seats, and a heated steering wheel.

The mystery adventure film stars Clooney as a former boy genius and Robertson as an optimistic teen. The pair go on a journey together in Tomorrowland to discover the secrets behind what is a mysterious place caught between time and space. The screenplay was written by Lost writer and co-creater Damon Lindelof, and Brad Bird. The film also stars Hugh Laurie, who appears on the television show, House, as well as Judy Greer and Kathryn Hahn.

“Tomorrowland is a place where nothing is impossible, which is something that Chevrolet believes can exist in the here and now,” says Tim Mahoney, vice president of Global Chevrolet.

The Volt and EN-V concepts will appear in the backdrops of the present day and Tomorrowland.