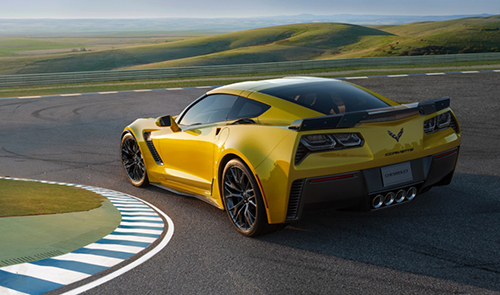 Chevrolet introduced today the 2015 Corvette Z06, which is the first Z06 to offer a supercharged engine, an automatic transmission and, thanks to a stiffer aluminum frame, a removable roof panel.

“The new Z06 is our most capable Corvette ever,” says Mark Reuss, president of General Motors North America. The model’s 6.2L V-8 engine produces 455 horsepower and 460 pound-feet of torque, numbers that increase slightly with the available performance exhaust system.

A track-focused Z07 Performance Package adds unique components for true aerodynamic downforce, Michelin Pilot Super Sport Cup tires for enhanced grip, and Brembo carbon ceramic-matrix brake rotors that improve braking performance and contribute to greater handling through reduced unsprung weight. Although development testing is ongoing, the Z07 package has already recorded some of the fastest lap times ever for a Corvette, surpassing even the ZR1.

Tadge Juechter, Corvette’s chief engineer, says the new model — which goes on sale in early 2015 — is a great example of the technology transfer between racing and production Corvettes.

“First, we took what we learned on the Corvette Racing C6.R and applied that to the all-new Corvette Stingray,” Juechter says. “Then, using the Stingray as a foundation, the Z06 and C7.R were developed to push the envelope of performance on the street and the track.”

In related news, the 2014 Corvette Stingray and Silverado 1500 were named the 2014 North American Car and Truck of the Year today during a news conference at the North American International Auto Show. It is the first time Chevrolet has won both awards in the same year.

“Chevrolet is in the midst of the most aggressive product transformation in the brand’s more than 100-year history,” says Alan Batey, General Motors senior vice president, Global Chevrolet. “The Corvette and Silverado truly embody the passion, commitment, and focus that is driving us to deliver the most expressive designs, innovative technologies, and engaging performance in every vehicle that wears the bowtie.”

The Corvette received 211 points, topping the Mazda3 with 185 points and the Cadillac CTS with 94 points. The Silverado received 219 points, besting the Jeep Cherokee with 174 points and the Acura MDX with 97 points.