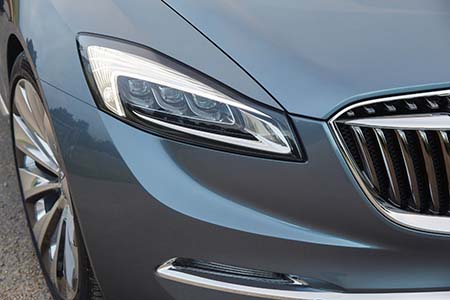 Chevrolet has released more details about the body structure of the 2016 Camaro, which has been pared down nearly 200 pounds and will be unveiled on Detroit’s Belle Isle on May 16.

“The new Camaro brakes harder, flicks into corners more quickly, and drives out of the corner faster,” says Al Oppenheiser, Camaro chief engineer. “We expect it will set the benchmark in the segment and give many sports cars a challenge.”

Changes to reduce the car’s mass include using aluminum to support the instrument panel as well as utilizing the metal in the front and rear suspension. Other components use a rigid composite material that’s lighter than aluminum. Oppenheiser says the total weight for the suspension is “21 percent lighter compared to current steel-intensive assemblies.”

IN RELATED NEWS, Detroit-based Buick has released details about the Buick Avenir concept, such as the lighting technologies used to enhance the design of the car.

“Technology will always be a major contributing factor to future Buick lighting designs as it allows for more flexibility with the aesthetics and performance of the light, but also how the light is integrated into the vehicle,” says Martin Davis, design manager for exterior lighting for Buick.

Three LED lights are assembled in a line within each taillight and headlamp. The headlamps and tail lamps incorporate “diffused light elements,” which help to form “wings” that stretch across the top of the lamp.

The wing accents on the lights are visible both day and night.