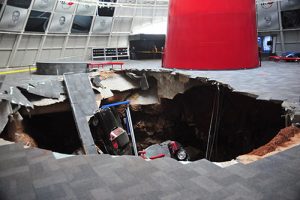 Chevrolet will oversee the restoration of historic Corvettes that were damaged when a sinkhole collapsed this week at the National Corvette Museum in Bowling Green, Ky. General Motors Design in Warren will lead the project, the automaker announced Thursday.

“The vehicles at the National Corvette Museum are some of the most significant in automotive history,” says Mark Reuss, GM’s executive vice president of global product development. “There can only be one, 1-millionth Corvette ever built. We want to ensure as many of the damaged cars are restored as possible so fans around the world can enjoy them when the museum reopens.”

When the cars are recovered from the sinkhole, which collapsed Wednesday, they will be shipped to the mechanical assembly facility, a specialty shop in the Warren Technical Cetner, where the restoration process for each vehicle will be determined.

The National Corvette Museum, which is independently owned and supported solely by charitable donations, is currently accepting donations to assist in refurbishing the facility. The museum, which opened in 1984, is located a quarter mile from GM’s Bowling Green Assembly Plant, which started production in 1981. For more information, visit corvettemuseum.org.