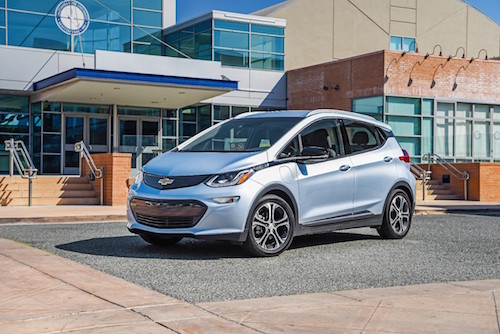 In an effort to offer the first affordable electric vehicle with 200 miles or more of range, Chevrolet will release its 2017 Bolt EV, which has an EPA-estimated range of 238 miles, later this year.

With an expected manufacturer’s suggested retail price below $37,500, the 2017 Bolt EV will be available in an LT or Premier model and feature cargo space and new safety and technology features such as a customizable color touchscreen and premium interior amenities. With a $7,500 federal tax credit, the Bolt EV will be available for around $30,000.

The vehicle will have a 12-month head start on Tesla and its planned Model 3, which has a projected range of 217 miles and is scheduled to be released in late 2017. Tesla plans to price its entry-level vehicle around $35,000, meaning it could be available for below $30,000 with the federal tax credit.

The Bolt EV, which is available in a range of colors, such as Arctic Blue Metallic, Cajun Red Tintcoat, Summit White, and more, also has a regenerative braking system.

“While range is important, we knew Bolt EV owners would want more — more space and more power — and the Bolt EV delivers,” says Josh Tavel, chief engineer of the Bolt EV. “Our team took special pride in optimizing every aspect of this vehicle, especially its impressive range and ride dynamics.”

When the 2017 Bolt EV arrives in dealerships later this year, it will join the company’s other electrical vehicle options: Chevrolet Volt and Chevrolet Malibu Hybrid.

Founded in 1911 in Detroit, Chevrolet does business in more than 115 countries and sells more than 4 million cars and trucks a year. The company first announced details about the 2017 Bolt EV at the 2016 North American International Auto Show in Detroit.