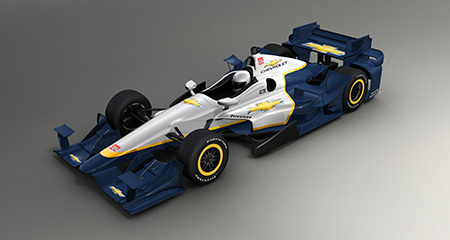 Chevrolet vehicles racing in the 2015 Verizon IndyCar Series, which kicks off March 29 at the Firestone Grand Prix of St. Petersburg, Fla., will feature new bodywork the automaker says will deliver greater aerodynamic performance than previous designs.

“This is an important milestone in Chevrolet’s involvement in IndyCar racing,” says Jim Campbell, vice president of performance vehicles and motorsports at General Motors Co. “We focused on developing an aerodynamic package that delivers a balanced combination of down force and drag, along with integrated engine performance. It’s a total performance package.”

There were nine phases that went into the development of the package, which included aerodynamic tests and full-scale models in a rolling-road wing tunnel. Chevrolet officials also conducted track testing of the prototype on racetracks in Florida, Texas, and Arizona.

“We took a clean-sheet approach to the aero kit, delivering an optimized and efficient design that should really give our Chevrolet teams an edge,” Berube says.

A second aero package for speedway configurations, designed for high-speed ovals, will be introduced ahead of its competitive debut at the Indianapolis 500 in May.