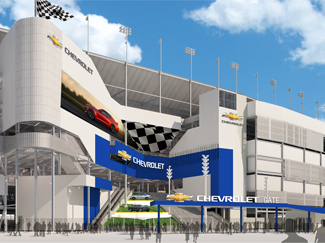 “Chevrolet’s commitment to racing originated more than a century ago with Louis Chevrolet and remains strong today as we solidify our presence at ‘The World Center of Racing’ by partnering with International Speedway Corp., Daytona International Speedway, and the Daytona Rising project,” says Alan Batey, president of General Motors North America. “We look forward to enhancing the experience for race fans here in Daytona with the new Chevrolet injector entrance and neighborhood.”

The Daytona Rising project will include five expanded and redesigned entrances that will take guests to three different concourse levels. The Daytona International Speedway will have about 10,000 more seats, twice as many restrooms, and three times as many concession stands. The speedway will also feature 60 luxury suites.

Detroit-based architecture firm Rossetti is leading the master planning of the project, while Southfield-based Barton Malow is serving as design-builder. The redevelopment is expected to create more than 6,000 jobs, $300 million in labor income, and generate more than $80 million in tax revenue.

Chevrolet will have naming rights for one of the entrances. The new entry will include more than 20,000 square feet of Chevrolet new vehicle displays and a fan engagement experience. The company will also serve as an official partner of “The Great American Race” and the Daytona 500.

The redesigned speedway is expected to be completed by the beginning of 2016.