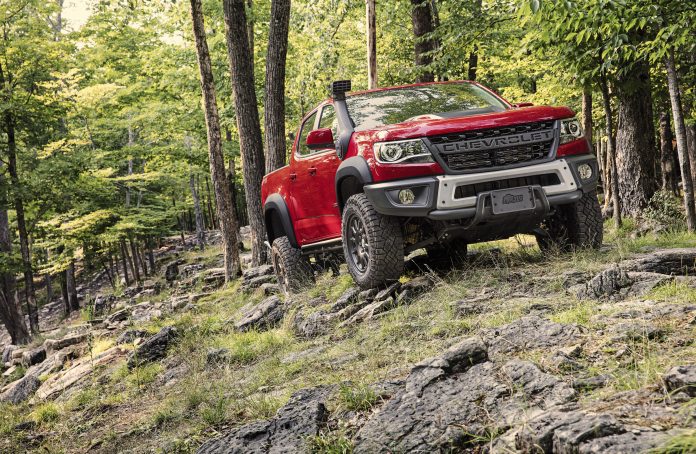 In addition, the AEV-designed stamped steel front and rear bumpers further shield the truck from obstacles, while the front bumper contains winch provisions and standard fog lights, with recovery points integrated into the rear bumper.

“More and more enthusiasts are discovering that Colorado is ideal for off-roading, especially overland travel,” says Sandor Piszar, director of marketing at Chevrolet Truck. “The Colorado Z71 offers a full suite of off-road equipment, the maneuverability of a midsize truck, and the driving range of a class-exclusive diesel engine.

“We’ve been following Colorado since its introduction, and the ZR2 really captured our attention,” says Dave Harriton, founder and president of AEV. “As this is the first Chevrolet vehicle we’ve given the AEV treatment to, we wanted to do something special with the industry’s first use of hot-stamped Boron steel. We also expect that Colorado drivers will love the added ruggedness of our front and rear bumpers on ZR2 Bison.”

AEV has a long history of ruggedizing Jeep Wranglers and Dodge Ram pickups. The company sources 90 percent of its parts from the United States, with the vast majority of its supplier base located in Michigan. The company’s suspension packages, hoods, bumpers, tires, rims, and other products are specifically designed for particular vehicles.

The ZR2 Bison duplicates the full equipment list of the Colorado ZR2, including, but not limited to:

Like ZR2, Bison also features a modified rear axle with a 3.42 ratio, front and rear tracks widened by 3.5 inches, and a factory suspension lifted two inches over a Colorado Z71.

Available options on Bison include:

Customers will also be able to purchase an available third-party accessory snorkel for ZR2 Bison from AEV, ideal for air filtration while driving on dusty trails. The feature is compatible with all Colorado pickup variants.

The 2019 Colorado ZR2 Bison goes on sale in January 2019, modified for extreme off-road use and backed by a full factory limited warranty. Pricing will be announced in the coming weeks.