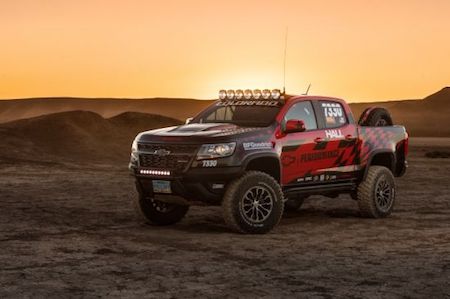 A modified 2017 production Chevrolet Colorado ZR2 will debut at the annual Vegas to Reno race, which is known as the longest off-road race in the United States. Chad Hall of Hall Racing will compete against 350 contestants in the 550-mile race, began today at 9:30 a.m. and ends sometime this morning.

“The Colorado ZR2 is one of the most capable production platforms we’ve used as a foundation for our racing program,” says Hall. “The base Colorado is strong and robust with the expected advantages of a midsize package. ZR2 adds great technology, like the Multimatic DSSV dampers and the front and rear locking differentials that are vital to stock class desert racing.”

The truck retains the stock ZR2’s 3.6-liter V-6 engine and eight-speed automatic transmission, along with a modified version of the vehicles’ Multimatic DSSV damper technology. The crew cab ZR2 also acts as a testbed for Chevy Performance and a range of potential parts to be offered for the ZR2 and the standard Colorado.

“The components being tested on this truck are ultimately intended to take the already-exceptional off-road capability of the Colorado to the next level,” says Russ O’Blenes, director of performance variants, and parts and motorsports at General Motors Co. “Racing them allows us to quickly understand their performance attributes and reliability in the extreme environment of off-road racing, ensuring the highest performing components for Colorado customers.”