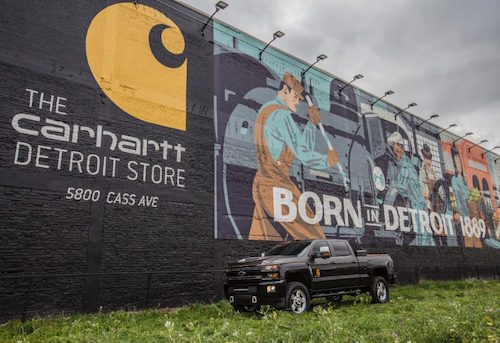 “When Carhartt and Chevy started working together on this concept truck, we quickly realized that our mutual respect for hardworking people and the utility they expect from our brands would equal the ultimate truck for anyone who works and plays in the rugged outdoors,” says Tony Ambroza, senior vice president of marketing at Carhartt.

The Silverado 2500HD Carhartt concept, which will join 20 additional Chevrolet models at the Las Vegas-based SEMA Show from Nov. 1-3, features a custom tonneau cover made from Carhartt fabric and a two-tone Carbon Flash exterior finish with a matte finish above the beltline and high-gloss black on the bottom half.

The truck also features a trimmed Jet Black interior with Carhartt’s duck brown garment material on the seats, armrests, and door panel inserts with triple-stitched seams similar to Carhartt jackets. The Carhartt logo is laser-etched on the headrests, while antique nickel-finish trim is used on the doors, center console, and instrument panel.

The concept is powered by the new Duramax 6.6L V-8 turbo-diesel engine, which is offered in the 2017 Silverado HD lineup.

Established in 1889, Carhartt has 5,400 employees worldwide and is managed by the descendants of the company’s founder, Hamilton Carhartt.

Chevrolet, founded in 1911 in Detroit, does business in more than 115 countries and sells more than 4 million cars and trucks a year.